CULTIVATE THE COURAGE TO LISTEN 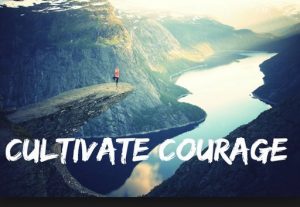 Listening Leaders confront conflicts by consciously cultivating courage. In environments of unending conflict, effective listeners meet the harshness of words and actions of others with courageous acts and actions of listening. Although most leaders remember the old adage: “Sticks and stones may break my bones, but words will never hurt me,” most listeners also recognize that conflict-laden words can be very hurtful and courage is required. When verbally criticized, Listening Leaders develop courage in a number of ways.

First and most importantly, they establish a pre-planned strategy for listening courageously. In the process, they develop a positive plan to respond rather than to react.

Second, they make a commitment to never take the negative words, dismissive taunts, and profane attacks of others personally. Most often such verbal attacks say more about the attacker than the attacked. When unfairly attacked by negative verbal assaults, effective listeners pause, step back, and consider the motive of the verbal attack and the verbal attacker.

Third, they develop the courage to withhold the desire and tendency to respond in-kind. Operating from the simple wisdom that additional negative words do not negate negative words, Listening Leaders resist the negative verbal counter attack.

Such acts of courage allow the fourth important step of dealing with conflict. Courageous listening calls for thoughtful consideration of numerous questions. Why am I being attacked? What is the source of anger? What is relevant? How do I respond in a rational, creative, and productive way?

Rudyard Kipling captured the spirit of every courageous listener with his simple words of “IF.” “If you can keep your head when all about you are losing theirs and blaming it on you; If you can trust yourself when all men doubt you, but make allowance for their doubting too; If you can wait and not be tired of waiting, Or being lied about, don’t deal in lies, Or being hated, don’t give way to hating, And yet don’t look too good, nor talk too wise:…Yours is the Earth and everything that’s in it, And ─which is more─you’ll be a Man, my son!”

LISTENING PAYS CALL FOR ACTION: Consciously cultivate the courage to listen when you are in conflict.