THE COURAGE TO SLOW DOWN WHEN LISTENING 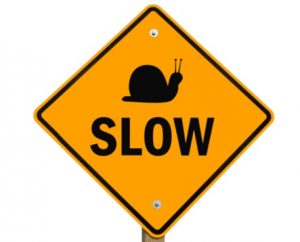 N. Williams has demonstrated what it takes to be a Listening Leader with his following story:

“This week it struck me how guilty I am of getting wrapped up in the noise and chaos of over communication and allowing this to get us off course. I was about to go into a meeting, my mind was already planning what I would be doing after the meeting, and as I entered the room I was still speaking on a cellphone and essentially was not being “in the moment”. As the meeting began it became apparent that I was not the only one. The other attendees were either late, typing frantically on blackberries, or had to leave the room to take or make cell phone calls. The meeting continued in this light and it was clear that the participants were distracted, disengaged and not in the right place to discuss what was essentially a subject and decision we would have lived with for a long time to come.

I took a deep breath, waited for everyone to “become present” and suggested that we adjourn to review 3 key points that had somehow surfaced during the chaos and reconvene at a time where everyone could bring something to the table uninterrupted. When I was asked why, I explained my observations and then listened. At first people disagreed, feeling that another meeting would be a waste of time, but then someone else also had the courage to point out that this meeting was in fact a waste of time. The other leader pointed out that no one was listening to each other, and this was not the right time or place to make a decision that would have a big impact on many of our team members. It was interesting to make a recommendation and to see the reactions that followed.

Time is a precious resource and only through listening to each other would it be maximized. After some more dialogue we reconvened and made a commitment to regroup once we each had made the time to recap the pertinent information and at a time without interruption. This flies in the face of the compulsion to multi-task, but in my mind was essential to have meaningful dialogue. I hope when this happens we will all come with a mindset to listen actively.”

LISTENING PAYS LESSON: Sometimes to move forward you have to have the courage to slow down or even stop.