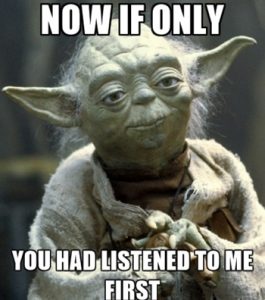 I received the following example from a listening leader who deeply listened and responded with an important decision.  Her boss chose not to listen.  The results are devastating.

Several years ago, I was employed with a company as a Credit Manager. I was responsible for minimizing the accounts receivable and bad debt. Even with success at this position for 8 years, and less than 1% bad debt on approximately 20 million in annual sales, a very unfortunate event occurred. The list of people involved begins with a sales staff of 4, 1 business owner, and myself. Charged with the responsibility to cut off customers that begin to show signs of faltering financially, I sent out the order to stop selling to a particular customer. A rather large customer, and in an industry with a perishable product, the owner very vocally decided to override my decision. After trying to reason with him, and providing substantial backup that the customer was in trouble, he told me that he knew what he was doing and it was not my concern.

Feeling totally humiliated over the compromising incident, and after years of having the boss’ full support, I decided that it was in my best interest to locate other employment. The morale of the staff was devastated, as it was quickly understood that the rules were not fairly enforced. When this episode first began the amount on the books was approximately $20-30,000 of current and past due sales. When it all ended, some nine months later, I learned that the loss due to bankruptcy totaled in excess of $100,000. Sadly, the company I worked for was already financially strapped due to the recent construction of a 22 million dollar facility, and this incident made the situation even worse off. During the years following my departure they sought to re-employ me, and that did give me consolation as they formally apologized and told me I was right.

LISTENING PAYS…..IF YOU MAKE THE INVESTMENT